It’s the call you dread… And we are on a roll this year.

I had just arrived at the gym to watch Kya’s volleyball game when my phone rings and it is Keegan and he is hurt. He was at his buddy’s house and they were running inside and he slipped and cut his foot on their buffet. He told me it was at least an inch long.

I rushed to pick him up and knew immediately that I had to bring him in, based on how deep it was and the fact that it was in the web of his toes.

When his Doctor spread his toes apart, I could not believe how deep it was! Five stitches later and he is down for the count again! So far, every high school trimester of phy ed (his favorite class) he has had so far, he has either had a surgery or an injury and cannot participate. Poor kid, he has some bad luck! He is the family record holder with four times for stitches & by far the most surgeries. He is a pretty tough teenager! Hopefully this time it will only be for a few weeks!

Thank goodness for his Xbox! It sure helps to keep his mind off his foot!

I think it’s time that I start making some chains… I might be a little ahead of myself on pendants! I have 65 pendants patiently waiting to be added to chains and tagged! Can you say procrastination? Yup! Me too!

I better get busy! 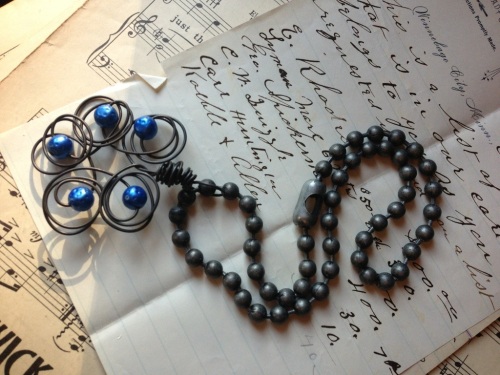 Hope you have a happy and uneventful day!
Kris